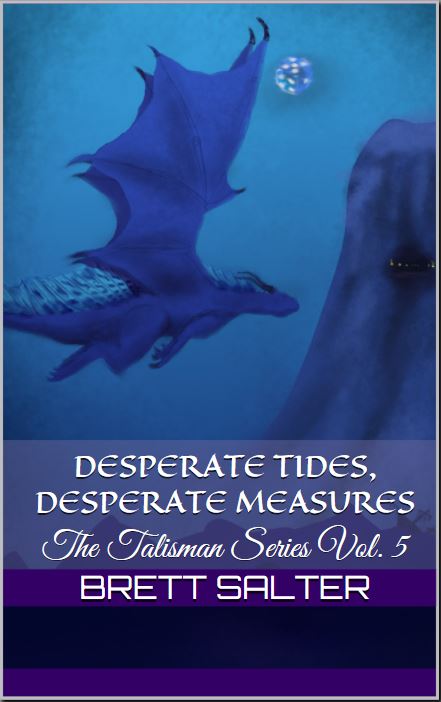 [Major spoilers ahead! A spoiler-free review is available here]

Desperate Tides, Desperate Measures is the fifth book of The Talisman Series by Brett Salter. I hope you are ready for a vacation setting with violent monsters because Brett is back with more characters, battles and creatures!

The story started with revelations that shocked me. The progression of the plot was swift after that, with multiple twists and turns.

I went through an emotional rollercoaster because I was invested in this story. The fight scenes stressed me out. I nearly cried when Jericho did Chaos Eater for Mr Rider. At random moments, there were hilarious scenes too. We get the old characters that we love and new cuter ones. There is more travel, more mysteries and more depth to the world of The Talisman series. The ending with the Garm spy and the cliffhanger made me regret reading this book before the next one is released.

There is more variety of monsters now, and they are more brutal than the previous ones. Moreover, The Great Synergy is not an advantage sometimes, as in a fight, if one is injured, the other feels it too. It makes me curious about future battles. Rome and Julian reached their full potential by accomplishing The Great Synergy and getting the upgrades, but their enemies kept getting stronger. They have great allies, but what else can they do? An army of Dragons from multiple Dens?

Unforgettable characters are an integral part of a great story. As expected, Brett brought back our beloved characters and added some new ones.

Rome is still in love. Rome is also more of a leader now but is a bit underconfident about this role he did not ask for. I loved Rome and Mr Rider’s interactions. Julian has become more Julian, if that was possible. He has his own dragon fire now. Camela is still Camela, but she is very underrated and needs more lines. She even sounded like a normal person when Mr Rider woke up. Where is the Camela I loved to be scared of? Krysta is still in love too. It was a nice touch that Krysta liked the three-word thing Mr Jones did.

Jericho is quite prophetic for an 18-year-old. I am still worried about who is taking care of him. Clay is enjoying his life, and he and Skye are adorable together. Mr Jones is fantastic as always, and he is even better when he is with Julian. His lines of “mess of junk” and “bowels of Glutton” are in character, and he needs more lines too. Cyprien is a bit too independent and impulsive, which might cause some trouble later.

Elementals are cute. I love Mander, and I love that he knows what an Uber is and talks in threes. He is an interesting third wheel too. Can we call Mrs Case “Wind Witch” as Zohnda referred to her?

Of course, nobody can be trusted thanks to Nocturns, as I said in the previous book’s review.

Mr Rider becoming possessed by a Nocturn was the best thing in this book. His evil version had no restraint when it came to being mean. Before it was revealed that the Nocturn was a very special one, it seemed as if Mr Rider’s persona had spilt over his Nocturn, at least in terms of attitude. He is hilarious and sassy. The “purify the bloodline” part was terrific. The “Baddest” Nocturn gets Mr Rider, and the Nocturn matches the human in savageness (No offence, Mrs Case and Jericho). I loved the scene when Mr Rider woke up and learnt the truth.

The writing has improved in terms of words used and writing style. I enjoyed the story’s integration with the real world. I even checked if Terrance BL International Airport exists. However, I felt that the editing of the previous books was better. The main issue with grammar errors is that they can unintentionally change the meaning of sentences.

Vocabulary, as usual, is above average for the target age group, but that’s still a positive point. I learnt new words like Ankh and maelstrom. Rome was using big words like “trepidation”. It seems out of character for him from a writing standpoint, but it could also be Mr Jones rubbing off on him.

I found it weird or unnecessary to put recaps in the middle of the story. The recaps right now are the one at the beginning of the book, the one big part in the main story content and Beacon’s and Mrs Case’s introduction more than halfway into the book. The recap at the beginning of the book was enough. With four books done, I feel that trying to summarize the story and do previous characters’ re-introductions will be overwhelming. I would either skip that altogether and just start the story or finish all recaps required in the beginning pre-chapter itself.

If any recap was required, I needed a reminder on how the library became a dragon hideout space since they’ve been touring the world for so long.

After four books, I am used to Brett’s foreshadowing, but I feel that “Miracle next to Dragon Dynes” may have been too much. There is a lot of foreshadowing now that it seems too much to keep track of, like Mrs Case’s secret, Moon Orchid favouring Rome and the Garm spy.

This book is more violent than the previous ones in the series, so young readers may not want to read it. The word ‘playboy’ was also mentioned, which is inappropriate for young readers.

To conclude, this book is another great one by Brett. There’s a never-ending list of characters we love and a rollercoaster of emotions and stress levels. The story is imaginative and fresh, and I look forward to the next one.

My favourite quote is by the narrator.

It seemed like Brett was confessing to running out of ideas for the magical aspects of his stories. I thought it was hilarious.

“Knight speak is total fraud” and “purify the bloodline” come in close second places on the Top Memorable Quotes list.

iThere are no comments

Begin typing your search above and press return to search. Press Esc to cancel.